Walking While Black L.O.V.E. is the Answer Made it to the House Floor 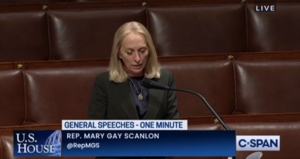 Yeadon Police and other community members broke ground on a Police/Community L.O.V.E. Garden at Yeadon Community Park, located at 523 S. Union Ave, Yeadon, PA, on Monday, May 10, 2021. The project comes from the Yeadon Police involvement with the film, “WALKING WHILE BLACK: L.O.V.E. Is The Answer” created by A.J. Ali, and the L.O.V.E. Is The Answer program he created dedicated to improving police and community relationships nationwide and teaching people throughout the world how to love themselves and others. 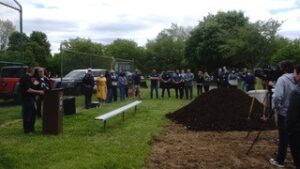 The L.O.V.E. is the Answer Movement is about putting four steps into action: 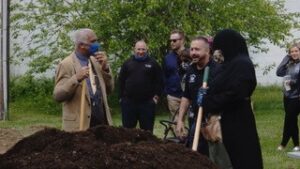 “I’m very excited that Chachi is leading the charge on the nation’s first L.O.V.E. Garden!,” said A.J. Ali. “There are gardens being planned in a dozen states so far, from coast to coast, but this is the first ground-breaking of any of them. Chachi is a true leader, and a true community servant. We love and appreciate him and we salute him as a L.O.V.E. Is The Answer Coalition member making a difference.”

“Yeadon Police are dedicated to our community and the goal is to do more than just talk, and actually take action to make change possible, because it is,” said Chief Paparo. “The end result is changing the narrative; destroying hate, division, and racism, and building relationships with our community that recognize we are all human beings regardless of the color of our skin or anything else.”

If you’re in the Yeadon, PA area, Chachi extends this invitation: Come join us for this endeavor and see what thinking outside the box in policing can do to get us all to start talking to learn about one another, and stop letting hate and violence thrive.

Here’s one of the many articles that came out about the garden: https://www.delcotimes.com/news/yeadon-police-unveil-first-in-nation-police-community-garden-project/article_1aa7882c-b1e5-11eb-8b0d-7f8f38eae359.html. Google “L.O.V.E. Garden Yeadon PA” for more.